← Review of Things Fall Apart
Review of You Should Have Known (spoilers!) →

Review of The Perks of Being a Wallflower 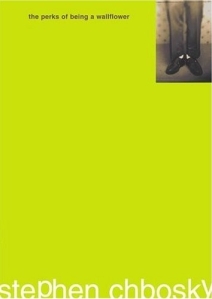 I’ve been hearing about Stephen Chbosky’s book The Perks of Being a Wallflower for years. It was always on my to-read list, but I never got to it. When the recent movie adaptation was released, I couldn’t see it until I followed my rule of reading the book first, and then Stuart got me Perks for Christmas.

The Perks of Being a Wallflower is told from the perspective of fifteen year-old high school freshman Charlie. In a series of letters to an unknown person, Charlie describes his first year of high school as it goes on: losing a close friend, struggling with school, being taken under a teacher’s wing, making new friends, and exposure to the party scene of those new friends. He also describes his family- his parents and two older siblings- with whom he is very close, and how watching his siblings grow up influences the way he himself grows. Watching is what Charlie does best, and his letters reveal an astonishing level of personal and social analysis that is both inspiring and heartbreaking.

The book surprised me right away. I don’t know what I expected, but it wasn’t for the book to be in letter form and for it to open with the main character, Charlie, grieving his friend’s suicide. Chbosky isn’t afraid to shove reality in your face, and I respect his not shying away from it from the beginning. He also doesn’t understate Charlie’s naivete. Both Charlie’s reactions and his written voice reveal it almost uncomfortably and we’re able to watch Charlie grow in both areas as the book goes on.

Cbosky doesn’t stops shocking with those elements, though. Throughout the book, we are left clues about Charlie’s past stay in a hospital when he was very young. It could have been a stay for pneumonia, for all we know in the beginning, but as the letters keep coming, it’s revealed that Charlie’s doctor at the hospital was a psychiatrist, who he started seeing after his beloved Aunt Helen dies tragically. His struggles were bad enough that he missed almost a year of school, and throughout the book, Charlie constantly references his fond memories of when Helen would babysit him and his siblings on Saturdays when his parents went out and how Helen was the one who made him feel most loved in the world. But as Charlie falls in love with his friend Sam and explores his sexuality with both her and his gay friend Patrick, it’s obvious that something is amiss. Chbosky saves the bomb until almost the end of the book, when Charlie is again under a psychiatrist’s watch, and it’s one of those reveals that makes you take a literal step away from the book.

I think about it sometimes. I wonder went on in Michael’s house around dinner and TV shows.Michael never left a note or at least his parents didn’t anyone see it. Maybe it was “problems at home.” I wish I knew. It might make me miss him more clearly.

I would really like to ask Sam on a date someday. I really would. She is so nice […] It would be very nice to have a friend again. I would like that even more than a date.

I always wanted to be on a sports team like that. I’m not exactly sure why, but I always thought it would be fun to have “glory days.” Then I would have stories to tell my children and my golf buddies. I guess I could tell people about Punk Rocky and walking home from school and things like that. Maybe these are my glory days, and I’m not even realizing it because they don’t involve a ball.

I just wish God or my parents or Sam or my sister or someone would just tell me what’s wrong with me. Just tell me how to be different in a way that makes sense […] I know that things get worse before they get better because that’s what my psychiatrist says, but this is a worse that feels too big.

← Review of Things Fall Apart
Review of You Should Have Known (spoilers!) →