← Review of Between Shades of Gray
Review of Eleanor & Park →

Review of Why We Broke Up 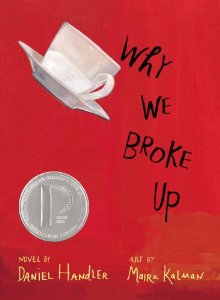 When I picked up Daniel Handler’s Why We Broke Up in the library, I was astonished by its weight. It wasn’t until I opened it that I realized that the book doesn’t just include art- it also includes artwork. In a collaborative effort, Handler (who revealed himself years ago as the true author of the Series of Unfortunate Events books) worked with artist Maira Kalman to weave a story made of words and pictures.

Why We Broke Up is Min’s (short for Minerva) story about all the reasons why she broke up with her boyfriend, Ed. The whole relationship began as something unbelievable; after all, Min is (as she detests being described) “artsy”, and Ed is the star of the basketball team. But for whatever, he takes an interest in her and who is she to say no to Ed Slaterton? From the beginning, people have deemed their relationship “…different,” which Min decides not to take as a warning sign. Instead, she and Ed soldier on, putting aside their differences and working into each others’ lives the best they can. Their friends don’t make it easy- Min’s friends think Ed is a dumb, rude joke, and Ed’s friends think it’s pathetically hilarious that the couple hasn’t physically gone beyond “everything but.” Eventually, try as they might, Min and Ed can’t make it work, and in one big box, Min shoves everything from their relationship to leave on Ed’s front stoop. This book, with pictures of each memento described, is her letter to him.

I love Handler’s style of writing. I’ve never read his Series of Unfortunate Events books, so perhaps this is his usual style, but I love the way Min’s inner voice works. Sometimes she’s poetic: “I don’t smoke, although it looks fantastic in films. But when I light matches on those thinking blank nights when I crawl my route out onto the roof of the garage and the sky while my parents sleep innocent and the lonely cars move sparse on the faraway streets, when the pillow won’t stay cool and the blankets bother my body no matter how I move or lie still. I just sit with my legs dangling and light matches and watch them flicker away.” Sometimes she has an almost jerky way of reporting dialogue: “Because I’d be,” I said, “you know, your date.” It’s the kind of writing that is only different enough to keep the reader on their toes.

The most remarkable thing about Min, and I suppose about her relationship with Ed, is that no matter the emotion, she wants to feel it deeply. A lot of characters, if they’re not too proud to admit emotions, note that they’re annoyed/sad/happy, but before they can talk about it, get distracted by something. Not Min. She lives life and its emotions to the fullest: 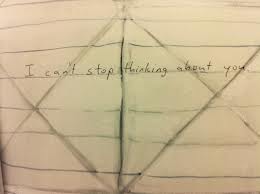 “A note, who writes a note like that? Who were you to write one to me? It boomed inside me the whole time, an explosion over and over, the joy of what you wrote to me jumpy shrapnel in my bloodstream. I can’t have it near me anymore, I’m grenading it back to you, as soon as I can unfold it and read it and cry one more time. Because me too, and fuck you. Even now.”

In a novel titled Why We Broke Up, written by the person who did the breaking up, one might expect Min to be vindictive, mocking, insert bad-person adjective here. But while Min can be all of those things toward Ed, she also hasn’t forgotten that the relationship held good things  too. She knows that she’s not completely blameless, and toward the end of the book, Min goes on a three-page, almost single-sentence rant against herself:

I’m not anything, this is what I realized to Al  crying with my hands dropping the petals but holding this too tight to let go. I like movies, everyone knows I do- I love them- but I will never be in charge of one because my ideas are stupid and wrong in my head. There’s nothing different about that, nothing fascinating, interesting, worth looking at. I have bad hair and stupid eyes. I have a body that’s nothing […] I scratch at places on my body, I sweat everywhere, my arms, the way I clumsy around dropping things, my average grades and stupid interests, bad breath, pants tight in back, my neck too long or something. I’m sneaky and get caught, I’m snobby and faking it, I agree with liars, I say whatnot and think that’s some clever thing.

And on and on it goes, in an almost disgusting display of self-hatred, but it’s only disgusting because we’ve all had that moment at least once and it brings us back to that moment, like all good writing can do. And all of this good writing is complemented by Kalman’s youthfully imperfect artwork, pictures that are a labor of love between exes. And so this book, too, is a labor of love, and a great one at that.

“He asked you out. Ed Slaterton.”
“He’s not going to call,” I said. “It was just a party.”
“Don’t put yourself down,” Jordan said. “You have all the qualities Ed Slaterton looks for in his millions of girlfriends, come to think of it. You have two legs.”
“And you’re a carbon-based life form,” Lauren said.

I liked, I admit, that we didn’t pretend there hadn’t been other girls. There was always a girl on you in the halls at school, like they came free with a backpack.

Ed, it was wonderful. To stutter through it with you or even stop stuttering and say nothing, was so lucky and soft, better talk than mile-a-minute with anyone. After a few minutes we’d stop rattling, we’d adjust, we’d settle in, and the conversation would speed into the night. Sometimes it as just laughing at the comparing favorites, I love that flavor, that color’s cool, that album sucks, I’ve never seen that show, she’s awesome, he’s an idiot, you must be kidding, no way mine’s better, safe and hilarious like tickling.

You shook your head. “She’s,” you said, “well, she’s OK, Jillian, but you can’t seriously be jealous. Look at her.”
“Most people would say,” I said, “that she’s beautiful.”
“That’s because she’s been with most people,” you said.

“Coach says coffee’s bad for you.”
“Unlike drinking every weekend.”
“You can get addicted to caffeine.”
“Yeah,” I said with another sip, “you see them living under the overpass, caffeine addicts.”

In the bathroom mirror there was a smudge of dirt on my neck, and I wiped it off in a hurried flush […] and then, meeting my own eyes, stood for a sec and tried to figure, like all girls in all mirrors everywhere, the difference between lover and slut.

“It’s kind of personal.”
[Al] turned off the water and watched me in the doorway with the towel on his shoulder. “OK.”
“I mean, it’s not like my period or my parents beating me, but personal.”
“Yeah, it’ rough when your parents beat you and you have your period.”

Posted on February 12, 2013, in Uncategorized. Bookmark the permalink. Leave a comment.

← Review of Between Shades of Gray
Review of Eleanor & Park →