← The Wilding by C. S. Friedman
Review of Cloud Atlas by David Mitchell →

F*ck I’m in My Twenties 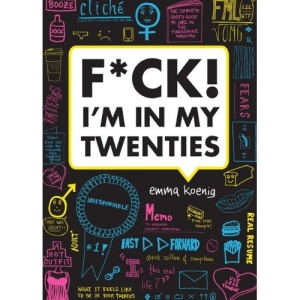 No, this isn’t your traditional book, but it does have two covers with words in between them, and it contains some incredible truths about being a twenty-something, so to me, Emma Koenig’s book is no less engaging than any of the others reviewed on this blog.

Starting out as some jotted notes in a notebook, then transitioning to tumblr where the drawings and notes were reblogged thousands of times (maybe more; I don’t know the numbers), before being picked up by Chronicle Books. Koenig is a New York-based actor/singer/writer, who begins her book with a witty forward, which includes such gems as

“I could have sworn that during freshman orientation the dean had said that as soon as we got our diplomas, a genie would appear and grant infinite wishes. Although now I think of it, I may has misheard her because I was texting.

“I hated that almost every conversation I had was either a defensive explanation of my life or a bland packaged script; both were devices to prove to whomever I was addressing that I had everything under control. Which I most definitely did not. I also couldn’t tell if I was overreacting. Was everyone else pleased as punch with their twenties? Was I insane for experiencing it this way? Did my mother obsessively read THe Bell Jar when I was in utero? WHAT WAS WRONG WITH ME?”

“[I went] to drama school, where it’s a prerequisite to have taken Overanalyzing 101 and to carry a Moleskin notebook everywhere.”

“This isn’t a ‘how-to’ book or a ‘how-not-to’ book, it’s more of a ‘how do I deal with my life without wanting to stab myself in the eyes with icicles?’ book.”

“Perhaps you’re one of those people who is (or was) perfectly content in your twenties. If so, FUCK YOU! I mean, um, CONGRATS.”

“I haven’t gotten very far at all imagining what my thirties will like, except for owning a really nice desk lamp.”

That’s just the introduction; most of the book is comprised of entries and pictures written and drawn by Koenig’s own hand. 50% of the book is what appeared on tumblr, while 50% of the content is new. In order to (try to) avoid copyright infringement, I’ll share a few that have appeared on tumblr, since they’re already been circulated on the internet. To see the others, buy this book! It’s available at Barnes and Noble and Urban Outfitters (in the latter store, it’s probably the only thing marked below $10, and therefore, the only thing I could afford, which only makes me like it more.)

← The Wilding by C. S. Friedman
Review of Cloud Atlas by David Mitchell →