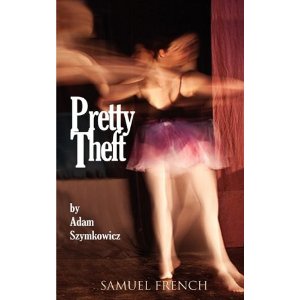 I picked up Adam Szymkowicz’s Pretty Theft at one of my favorite places in New York City, the Drama Bookshop. It was on display and it had a blurry picture of a ballet dancer on the cover. I’ve already explained my fascination with ballet, so of course I picked it up. It sounded intriguing, so I bought it.

The play is about an eighteen year-old girl named Allegra, who, with the help of high school acquaintance Suzy, gets a job at a mental hospital before she starts at Dartmouth. She wants to be a therapist, and after the first day, she’s already being commended on her skill with the patients, particularly one named Joe. Joe is a high-functioning autistic, placed into the home in his early twenties because his mother didn’t know how to deal with him after his father’s death. Allegra is the only one who can get Joe to do anything, and he soon develops an innocent crush on her. Suzy grows jealous that Allegra has proved to have such skills, and casually ruins a few things in Allegra’s life. Upset by her father’s death and Suzy’s destruction, Allegra agrees to run away from her problems with Suzy. After a few nights on the road, the girls stop into a diner, where a man named Marco has been charming the solitary waitress for the entirety of the play. However, he immediately shifts his attention to the two high school girls and, when they tell him that they don’t have any place to stay, offers them a night in his motel room. Things go as you might expect: Marco turns out to be a creep who drugs both of the girls and takes Polaroids of them while they’re unconscious. Once Allegra returns home, she tries to pick up the pieces of the life she left behind.

The word I would attribute to this play is weird. It’s very weird, in good and bad ways. The show opens with two ballet dancers pirouetting around the stage, Allegra clumsily trying to imitate them. These dancers appear throughout the play, speaking only occasionally and sometimes taking on other roles. They stem from Joe’s love of ballerinas and watching ballet on TV, but I didn’t quite understand their function in the play. I’m sure it’s something deep about showing how beautiful life could be against the messes that are these characters’ lives, but it didn’t entirely work for me. The scene in which Allegra visits her dying father in the hospital and delivers a monologue to him is touching and real- she ranges from dutifully sharing her daily activities to rage that he never paid attention to her to sadness over his impending death- but I wish she had had at least another scene with him and taken those emotions more slowly so she (and we) could feel them even more.

I very much enjoyed the scene where Suzy goes to the movies with Allegra’s boyfriend, Bobby. Suzy makes every attempt to get Bobby to kiss her, but he says no every time. When asked why, he tells her, “If I kissed you, you’d never be the same. My kiss is devastating.” Suzy scoffs at this, so finally, Bobby kisses her, only to be laughed at by Suzy. “Did someone tell you you were a good kisser?… You’re kind of bad. You can’t just stick your tongue in and not move it.” “You have to let the experience wash over you,” Bobby deadpans.

As cliché and predictable as the assault scene with Marco might seem, I actually didn’t expect it, which either means that Szymkowicz did a good job of constructing the character in a non-creepy way, or that I should not be around men in a diner by myself because the same thing will happen to me. It was shocking and scary, and the fact that it’s not lingered upon makes it even more so.

Another way the word “weird” figures into the story is that Allegra sees herself as such. The play opens with her speaking, but no one listening. “I’m talking too much, aren’t I?” she asks the non-listener worriedly. “I’m sorry about that. It’s just that I feel invisible. Even in my nightmares lately, I’m conspicuously absent. What does it mean when you no longer play a prominent role in your own dreams? I guess I’m just not good enough.” We see Allegra assert herself more and maybe, possibly grow as a person in the scene with her dying father, when she confronts him (as much as she can confront an unconscious man) about ignoring her as a child. It’s unclear if this assertion is personal growth or just a fleeting moment, as she backs down and apologizes moments later and is timid again for much of the play. After the debacle in Marco’s motel room, she scares him away by shouting at him, but is again reticent and selfish in the final scene with Joe.

Joe’s story is possibly the saddest of the play: while his mother was horrified at his being born autistic, his father was determined to treat him as any other little boy. When the father discovers that baby Joe can repair an engine without anyone teaching him, Joe’s father proudly incorporates his son into the family business. But when Joe’s father dies suddenly, his mother is overwhelmed with the task of caring for an autistic son, even one who is an adult, and sends him to a mental institution. The scene in which he thinks about his past is very sad and touching, and all of his monologues throughout are much the same. It’s obvious that Joe is extremely intelligent, but both his autism and people’s inability to see him as a person despite it keep him from reaching his full potential.

I’m still on the fence about how I feel about Pretty Theft. I know that I think it’s not done yet- I think it could use another revision. But then again, perhaps that’s because that’s where I am in my life…